Destiny learns of the power of bottom-sniffing, Kali is reunited with an old partner in crime, Nelson adopts one of Vince's cubs and Marion overdoses on catnip.
Preview clips 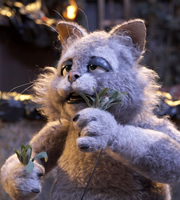 Destiny goes on a date with a dog who enlightens her to the power of bottom-sniffing when it comes to getting to know someone.

After sniffing all the bottoms in the neighbourhood, including that of broadcaster Paul Ross, she is bitterly disappointed that it seems the love of her life could in fact be her straight-laced, metrosexual fox friend Nelson.

Kali is reunited with an old partner in crime, but is irritated to discover that he has no interest in helping her terrorize the neighbourhood as he has now found God and seen the error of his ways. Annoyed, Kali plots to try and tempt him back to the dark side.

Nelson adopts one of Vince's cubs after Vince reveals that he ate the others in a cannibalistic massacre because he was hungry and couldn't find a spoon for the yoghurts in his fridge - they were rhubarb flavour so he didn't fancy them anyway.

And Marion has severe paranoia and a craving for instant noodles after overdosing on catnip.

Some sources give this episode the unofficial title Runt.

What kind of God?

Kali sings a song about why she doesn't believe in God.

Nelson introduces Destiny and Marion to his new adopted runt son, and tries to explain about the idea of 'runts of the litter' using Paul Ross as his example.

Destiny talks to Nelson and Kali about a dog called James who she met last night, who could be "The One." The secret of the dog bark is revealed.