Nelson's French penfriend Christian arrives for a visit, but brings rabies with him. Destiny discovers that her new boyfriend is a pimp organised by her owner Gary to get her to produce pups. When Kali is caught up in a pigeon cull, she resolves to take revenge on humankind.
Preview clips 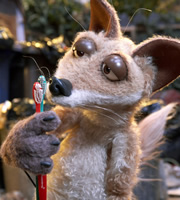 Nelson's effete French penfriend Christian arrives for a visit and starts behaving uncharacteristically badly, exhibiting mood swings and frothing at the mouth. Yes, it seems Christian has rabies. Nelson and Marion must contain the disease and save their friends.

Destiny discovers that her gorgeous new boyfriend Archie is in fact a pimp organised by her owner Gary to get Destiny to produce some pedigree pups. Destiny decides to teach Gary a lesson.

When Kali is caught up in a pigeon cull, she resolves to take over the world and take revenge on humankind by creating the pigeox - half pigeon, half fox. All she needs to bring her invention to life is a bit of help from a passing fox, like Nelson, or, failing that, his vicious friend Vince.

Song: My Destiny - Sung by Nelson, stopped by Destiny.
Written by Adam Miller.

Some sources give this episode the unofficial title Rabies.

Kali explains her new evil plan to take over the world via PowerPoint, much to the disgust of Nelson. He is not keen on fathering a pigeon-fox hybrid - a pigox.

Nelson's French penpal Christian is visiting the Isle of Dogs. However, Nelson is not sure where to take him for dinner, so asks the rest of the Mongrels for suggestions.

Nelson visits the Doctor as he fears he may have caught rabies from his French penpal Christian. Whilst he's there, he recalls getting frustrated at Scott Mills' use of the English Language on BBC Radio 1.