Springwatch comes to film on the Isle of Dogs and Nelson is horrified to discover all the animals are, in fact, actors. Destiny becomes a guide dog, Marion attempts to win love by staying alive for one more day, and Kali reveals she used to nest in Amy Winehouse's hair.
Preview clips 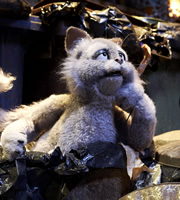 The BBC's Springwatch comes filming to the Isle of Dogs and urban fox Nelson is horrified to discover all the animals are, in fact, actors. But when Nelson discovers that Afghan hound Destiny loves the show, he seizes the chance to impress her by auditioning for a part.

Out on a walk in the park, Destiny meets a guide dog and decides that guiding is for her - purely because she likes the idea of being in control. However, Destiny quickly discovers that guiding has its downside. It's time for her to find someone else to do her work for her ... Nelson.

Tomcat Marion falls for the beautiful Lollipop and discovers all he has to do to make Lollipop his soulmate is to stay alive for one more day. How hard can that be? After all, a cat has nine lives...

And Kali the pigeon reveals that she used to nest in Amy Winehouse's hair.

Song: What A Difference A Day Makes - Sung by Marion and Lollipop.
Written by Danielle Ward.

Some sources give this episode the unofficial title Springwatch.

BBC's Springwatch comes filming to the Isle of Dogs and urban fox Nelson makes an appearance, but is less than impressed by Chris Packham's comments.