Destiny enjoys a taste of life in the limelight after being awarded Animal of Courage 2010, but it is Marion who is the real hero. Nelson tries to be stroked by a human and Kali develops a crush on a crow that turns out to be female.
Preview clips 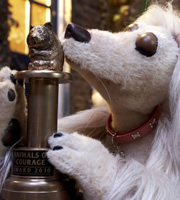 Afghan hound Destiny enjoys a taste of life in the limelight after being awarded Animal of Courage 2010.

However, there is tension in the yard as Marion is the true hero, but Destiny, dazzled by the attention, refuses to come clean. Everything soon backfires though and she is forced to redeem herself.

Meanwhile, urban fox Nelson is on a mission to experience being stroked by a human. However, when he finds himself trapped in the local petting zoo, the experience is less than enjoyable and he resorts to calling on Destiny to save him.

Song: Everybody Loves A Lesbian - Sung by the Female Crow, featuring Kali and Destiny.
Written by Danielle Ward and Adam Miller.

Some sources give this episode the unofficial title Never Been Stroked.

Everybody loves a lesbian

A song about lesbians. Warning: this clip is not suitable for young viewers or those easily offended.

Destiny is up for an "Animal of Courage" award.

A young boy is drowning and it is up to Destiny to save him, but she has a Magnum Classic to finish.

Nelson spends the night in a petting zoo after being desperate to be stroked. However, during the night he finds an unwanted visitor in his pen, in the form of Clive Anderson.

It turns out Nelson has never been stroked.