Britain's greatest sailor, Admiral Nelson, turns out to be horribly seasick, two doctors from the Middle Ages argue over how to treat a patient, the programme discovers the many uses for an Incan llama, and the World War Two Girls sing about Girl Power on the Home Front. 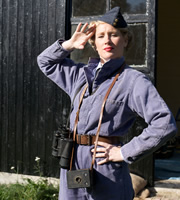 Alexei Sayle guest stars as a healer in a Historical Hospital sketch on the Crusades, while a Second World War girl band sing about girl power in the Forties.