A pirate captain worries about early bedtime, a soldier from the First World War struggles to cook with fake food and the four King Georges form a boy band and sing Born To Rule - a musical journey through 18th-century British History, sung in the style of a Westlife ballad. 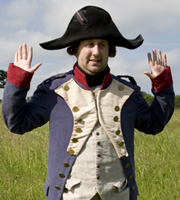 A rather unsavoury liquid that was used to clean clothes in the Middle Ages is revealed in this week's edition of the comedy sketch show which takes a humorous look at all things historical.

Historical Hospital sees a stone-age doctor try to cure a terrified modern patient's headache and My Stuart Family are amused when they feast their eyes on their first banana.

King Pepi II, a pharaoh, discovers a novel way to combat flies and Meera Syal reads the Ancient Egyptian version of The Princess And The Pea.

King Henry VIII is reminded of all the people he beheaded in This Is Your Reign and the Tudor monarch rounds off the show with Divorced, Beheaded And Died, a witty ditty detailing the lives of his six wives.