Featuring Ben Miller in the title role, Horrible Histories looks at the life and reign of King John (1166-1216).
Preview clip 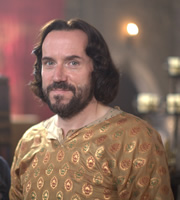 King John was one of the most rotten rulers of the lot, whose life was dominated by fights with English noblemen. This episode will explore what was happening in the world during King John's life, such as the rise of Genghis Khan, and the Crusades as well as looking at the King himself, as he went from problem child to angry adult and how, just a year before his rotten death, he signed the Magna Carta in 1215 - the greatest thing to come out of his reign and a document that still affects our lives today.

King John explains The Magna Carta... via a song.