Some Vikings attack a monastery but can't remember why, a peasant gets a posh makeover on Georgian Fashion Fix, Crimewatch BC tries to solve the murder of Julius Caesar... and prepare to be confused by the Egyptian hieroglyphics song. 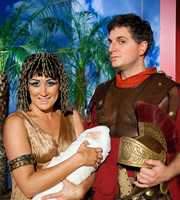 The Vicious Vikings get a lesson in applying war paint and the monks at Lindisfarne get a nasty surprise. There is a deadly lesson in Tudor football and the snappy hieroglyphics song attempts to explain the confusing Egyptian symbols.

The Georgian era features a lesson in communicating with their most up-to-date mobile technology - a fan; and Historical Fashion Fix gives a Georgian peasant an aristocratic makeover. Finally, Crimewatch BC investigates the death of Julius Caesar.