Ug and Grunt show us how to paint like a caveman, some silly WW2 codebreakers forget their own code, and Henry VIII challenges the King of France to a wrestlemania-style showdown! 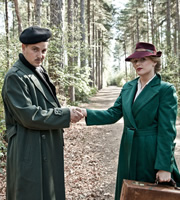 A crime scene investigation in the savage Stone Age throws up some very interesting cavemen traditions, including the firing of 17 arrows into the chest of a dead person as a mark of respect and slicing their heads open to remove their brains!

Meanwhile, code breakers in the woeful Second World War struggle to work out their own codes and show off some rather nifty inventions, such as bombs disguised as animal poo.

Terrible Tudor Henry VIII challenges the King of France to a wrestlemania-style showdown, only to face the shame of being beaten when the handsome Frenchman trips him up.

Rounding off the show, a witty ditty details the terrible deeds committed by the Incan Emperor Pachacuti.