The Ug and Ugio families go head to head on Stone Age Family Fortunes, mad King George III's doctors are even madder than he is, and Emperor Elagabalus launches his pranktastic Roman lottery. 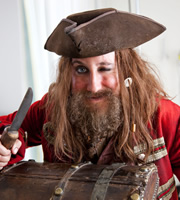 Meanwhile, the Putrid Pirates are in harmony for once in the lusty Bluebeard Song and the Smashing Saxons discuss the nation's favourite talking point - the weather.