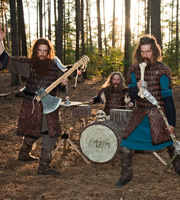 Horrible Histories' ratty host is throwing his own disco, featuring all of the hilarious comedy songs from the series, plus the rousing tune Born To Rule from the first series.

The Savage Songs Special features punky Celt Boudicca, Spartan School Musical, a pop-tastic number all about how Spartan boys became warriors; and the Vikings contribute a rock-filled song about their invasion of England.

Incan emperor Pachacuti entertains with his cheesy pop song all about his tribe's scary habits (like drinking from the skulls of their dead enemies and using their arms for flutes); posh Charles II channels his inner Eminem to rap all about how he's the original merry monarch; and Blackbeard the Pirate tunefully explains his scurrilous ways.

Georgian George finally gets to go solo; the Cowboys tell all about the reality of life in the saddle; there's the educational Victorian inventions song; and some original girl power from the Second World War ladies. Finally, the four King Georges form the ultimate boy band with their performance of Born To Rule.