An Incan child has the worst birthday ever, a Roman farmer meets a door-to-door poo salesman, and King George IV embarks on a solo musical career. 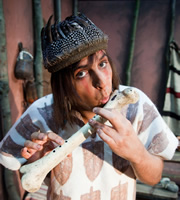 The Bob Report condenses the history of the Crusades into 90 seconds, while George IV sings about his role as Prince Regent. Plus there is a lesson in Roman table manners.