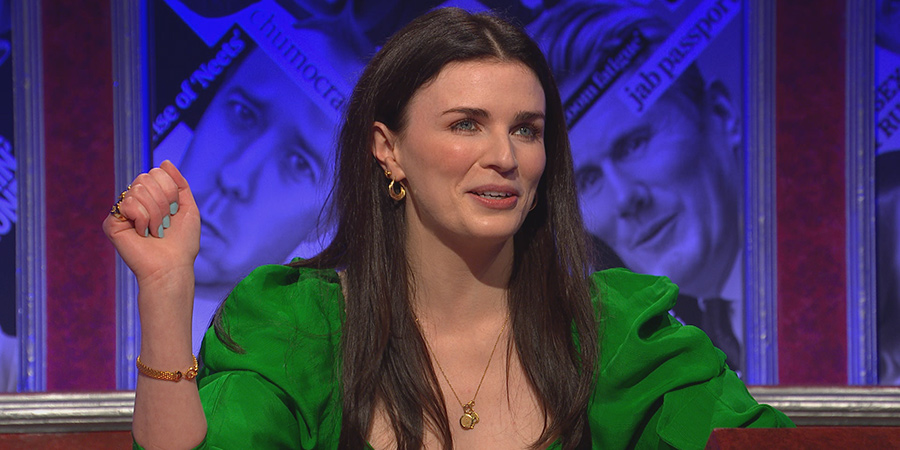 Aisling Bea takes to the host's chair for her programme debut. Ian and Paul are joined by comedian and actor Roisin Conaty & BBC newsreader and the recently-announced new host of Mastermind, Clive Myrie.
Preview clip

The concluding episode for the series came in the week that saw Boris Johnson marry Carrie Symonds, Lord Geidt clear the PM of breaking the ministerial code with regards to the refurbishment of his home at Downing Street, Kevan Collins resign over the lack of funding for education "catch up" and Piers Morgan interview Keir Starmer for his ITV series Life Stories where he asked him 14 times if he took drugs at university.

"The ceremony was in Westminster Cathedral. How come twice divorced Boris was allowed to get married there even though the Catholic Church doesn't actually allow divorcees to remarry in a church?" asked Aisling.

"Very good question. And it raised a lot of consternation among Catholics and some clergy as well. Indeed, one father said that clearly there is one Canon law for the rich and one for the poor" explained Clive.

Ian added: "It's a technicality. Obviously, the country were amazed that Boris should be failing to obey the rules."

Ian then went on to explain "Downing Street was very clear to tell us that the Prime Minister had actually paid for the entire wedding himself..... I mean, just unbelievable what a guy."

Aisling pointed out: "It saves so much money you know, not buying anything in their home."

Ian agreed: "Yes I think it's quite indicative that when someone else is paying it's gold wallpaper and when he's paying it's hay bales."

On clearing out the church for the ceremony, Aisling explained: "Do you know what they told the people & all the staff who were in the church? .... They ushered them out by telling them that the building was under lockdown."

"The first lockdown that Boris has been on time with" claimed Ian.

Later on in the episode the panel turned to Keir Starmer being interviewed by Piers Morgan on Life Stories this week, in a move to help "popularise" him. Having been asked 14 times whether he did drugs at university, Kier's response to Piers was "we had a good time at university."

Paul turned to Ian: "Surely at university you must've been enticed to taking some snuff at some point?"

Ian's jokingly replied: "Let's put it this way Paul, we had a good time... and if you start on Sherry, I'm going to leave"

A look at how the PM was able to hold his secret wedding.