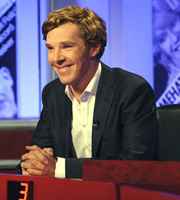 Have I Got News For You returns to BBC One on Thursday 14 October for ten weeks. And the first guest host will be the hugely popular, BAFTA-nominated actor Benedict Cumberbatch, critically acclaimed star of the recent hit series Sherlock. This will be his first time as guest host.

Benedict comments: "I'm very excited and honoured and, like a moth to the flame, I am terrified but cannot resist! I have watched the show since its inception, and my family and I used to make it a routine TV date to relish. How could I resist the chance for the audience to witness my being shot down in flames by the wit of Merton and Hislop?"

Nominated for a Bafta for his role in Small Island, Cumberbatch will be seen on the big screen as the star of two major films, Steven Spielberg's version of War Horse with Jeremy Irvine, David Thewlis and Emily Watson and Working Title's movie version of John Le Carré's Tinker, Tailor, Soldier, Spy alongside Gary Oldman, Colin Firth and Tom Hardy.

This will be the 138th show hosted by a guest presenter in the eight years since Angus Deayton left in October 2002.

Paul and Jon are the winners.