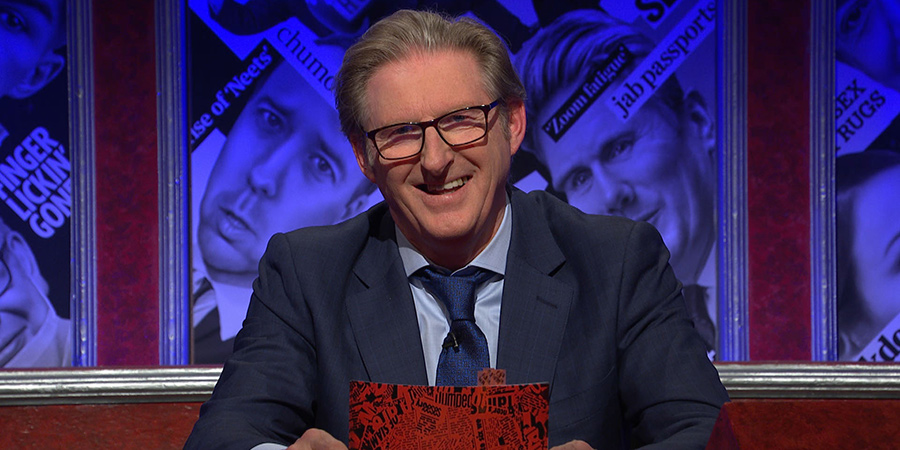 Adrian Dunbar guest presents the second episode of the 61st series - his first appearance on the programme. Joining the Line Of Duty actor is comedian Katherine Ryan (now her eighth appearance on the show) and The Sunday Times's Political Editor Tim Shipman.
Preview clip

Adrian Dunbar hosts HIGNFY in the week that saw the country mourn the loss of the Duke of Edinburgh, lockdown restrictions being eased and questions being raised over David Cameron's role with finance firm Greensill Capital after his tenure as Prime Minister.

With Dunbar in the host's chair for the first time, both he and the panel provided plenty of enjoyable references for fans of the BBC One smash-hit Line Of Duty to enjoy when discussing the week's news.

Adrian Dunbar's attention turned to the easing of lockdown restrictions across the country:

"This is the joyous lifting of lockdown, or if you're watching the repeat, the reckless harbinger of the third wave."

"One vaccine development this week is that AZ has been backed by the MHRA, an EMA using data from the ONS and the PHE to support the JCV... I mean... hang on... I only said yes to this show to get away from bloody acronyms!"

"According to the Daily Mirror on Monday, 4 million pints of beer were sold in the UK, the equivalent of 92 pints per second. Which proves, if there's one thing we can roll out faster than the vaccine... it's the barrel!"

"How I've missed those spur of the moment, impromptu quick drinks with mates, where you just go online to the local pub's website, access the booking form, find an hour and a half window on the 23rd April between 5:45 - 7:15pm in the garden, use a credit card to pay a deposit to secure the booking, and enter the names, emails and mobile phone numbers of each of the people who will be attending... and chill..."

Later in the programme, the panel discussed David Cameron, who will face an investigation over his role with finance firm Greensill Capital, with panellist Tim Shipman delighting in dropping Line Of Duty references where he could.

"Well it's David Cameron. This is the part of the show where we talk about nicking bent lobbyists, allegedly."

"He got involved with this financier chap called Lex Greensill... Lex Luther not being available that week... He got him to come and work for him and then when he stopped being Prime Minister, he started doing some work for Mr Greensill in return. Phoning up all his old mates and asking for lots of money. Unfortunately, most of his old mates told him to get stuffed. Boris Johnson has been shocked to discover that all this has been going on so he's ordered an independent inquiry."

Katherine Ryan: "It's very urgent, it only took 11 years to be investigated..."

Shipman: "Dave is going to turn up, he's going to answer all the questions. Though I think you'll find, Adrian, that he does want to be quizzed by someone one rank senior to himself..."

Referencing D.I. Ted Hastings gut-wrenching line in the most recent episode of Line Of Duty when told AC12 was to be closed, Ian Hislop continued about Cameron: "When I look at Cameron, I just want to say 'what has happened to us? When did we stop caring about honesty and integrity? It's not a rhetorical question."

The teams drew, 6 points each.

The panel talk about whether or not the vaccine programme has been a success.