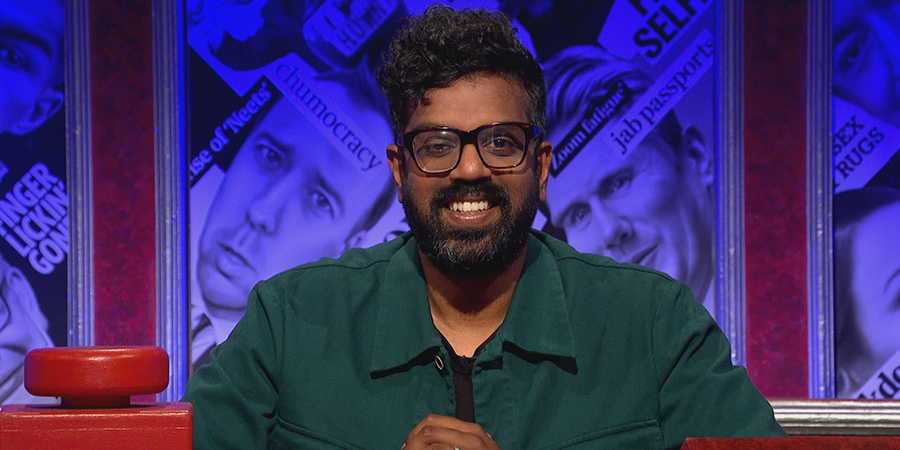 Romesh Ranganathan guest presents - his fifth appearance on the programme, and third time in the host's chair. Joining him is guest panellists Jo Brand and Lemn Sissay.
Preview clip

This episode came in the week that saw the fall out of the country's local elections, the Queen's speech in the House of Lords, a step towards the next part of the covid roadmap, and Coldplay launching their new single on the International Space Station.

The panel's attention turned first to the Labour Party's performance at last week's local elections, with leader Sir Keir Starmer reshuffling his shadow cabinet this week amid disappointment within the party at the poll results.

"These are the election results, which were extraordinary" said team captain Ian Hislop.

"Can I just say I thought the Labour Party did really well," replied Jo Brand, continuing "I mean, they took Wales, didn't they, pretty much right across the board?"

"So, well, that's one country out of four," said Brand, with tongue in cheek.

"Jo, can I just ask... are you deliberately trying to sugar coat this, or is this what you genuinely think, that this was a good result?" responded Ranganathan.

"I'm just lying because it seems to be the way to get ahead in life. Everyone else is doing it" joked Brand, continuing, "You know... I think I'm a very positive person."

"You're a glass half full kind of Labour person," laughed Hislop.

"Yeah, cause I've drunk most of it!" joked Brand.

"What did Keir do next? What was his next move?" asked Ranganathan.

"He's actually taken the chairs on the Titanic and moved them about, but there's no Titanic and there's no chairs, there's just a group of people changing places with each other and then saying 'you're this' and 'I'm that'. 'I'm this now and I'm going to do that', and they won't do it," pointed out panellist Lemn Sissay.

"It feels like you lack a little bit of faith in the process..." laughed Ranganathan.

"It was all just a mess, and people who said Starmer's incompetent and has got no judgement, well the test was, could he reshuffle the chairs on the Titanic. What he did was throw them overboard and jump into the iceberg," joked Hislop.

"He also did a round of interviews and told the BBC 'I will change things that need changing and that is the change I will bring about'. Change number one... fire speech writer," joked Ranganathan.

Later in the episode, the panel's attention turned to this week's covid recovery roadmap developments, with the announcement that people will be allowed to hug each other in the UK from Monday.

"Holidays! Hugging! All these things are going to happen providing there's no setbacks," said Merton.

"Yes, this is the devastating news that we've reached stage three of the covid recovery road map, which means that from Monday, people will be able to hug us again. As if things haven't been bad enough... I mean, my mum has asked if she can come round my house at 11:59. She'll be queuing outside my house like I'm launching the iPhone 12," joked Ranganathan.

"I think there's quite a lot of people not really looking forward to the hugging thing, who have rather enjoyed not having to," said Brand.

"Have you enjoyed not having to?" asked Hislop.

"Yes I have. I'm getting a taser," joked Brand.

"Nigella Lawson came up with a recipe that was a chicken dish with 40 cloves of garlic. And the name of the dish... 'Chicken Halitosis'" laughed Brand.

"One of the less successful Walt Disney characters..." joked Merton.