It is wedding lottery time again on Jinsy and residents are making frantic last-minute preparations before being randomly assigned new partners for the next three cycles.
Preview clip 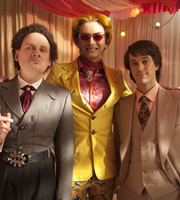 It's wedding lottery time again on Jinsy and residents are making frantic last-minute preparations before being randomly assigned new partners for the next three cycles. Forcing complete strangers to marry is not only one of the island's finest traditions, it's also the most effective way of keeping the breed pool clean.

While ordinary Jinsy folk pack their belongings into gender crates and say goodbye to their current spouses, arbiter Maven is hatching a plan from the comfort of the Tower. Always keen to build good public relations, he's decided that either he or Sporall should enter the lottery this time. But since arbiters are immune from the marital bingo, it seems as though Sporall's going to be the one to do it.

Although Sporall may feel anxious about his uncertain fate, for most islanders, it's an exciting time - not only do they get to see Maven wearing his ceremonial leotard, there's also a chance to get up close to local celebrity Mr Slightlyman (David Tennant), an outrageously camp wedding planner with a penchant for plastic surgery. As well as being one of the wealthiest and most recognisable faces on the island, Slightyman is also 'Master of Balls' - overseeing the lottery draw and revealing the all-important love matches to the islanders.

But as the eagerly anticipated draw approaches, Sporall begins to suspect that all is not what it seems. Could Slightlyman be hiding something behind his surgically enhanced veneer?

A regular feature of life on Jinsy is the Punishment Round-up - not only is it a quick and effective way of maintaining order, it also makes great tessellator viewing for the island's residents. Each week, punishments are dispensed by the strangely alluring yet devilishly sinister Joon Boolay (Harry Hill). Whether it's the suspension of dance vouchers or simply a mild electrical, Ms Boolay decides the punishment to fit the crime.

The first broadcast of this episode received 51,700 viewers - a 200% increase on the slot average.

David Tennant in This Is Jinsy

David Tennant guest stars in This Is Jinsy as local celebrity Mr Slightlyman, an outrageously camp wedding planner with a penchant for plastic surgery.