Arbiter Maven must resort to extreme measures when plans to construct a bridge in his own honour are thwarted by crusty eco-warrior Edery Molt.
Preview clip 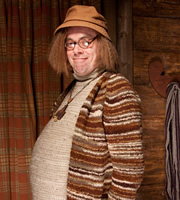 Whether it's the majestic beauty of Mickie's bucket, the intriguing scent of the Lemony Dog, or Mrs Boulay's strangely fascinating face, few things quite take the breath away like the Three Wonders of Jinsy. But that's not to say there isn't room for another.

Modelled on the precise contours of its namesake's nose, The Arbiter Maven Bridge is soon to become the fourth. And while perhaps not the best use of public money, it will at least ensure Maven can perambulate from his chalet to the tower without getting his shoes muddy.

But when shower-shy eco warrior Edery Molt (Kevin Eldon) gets wind of the plans for the bridge, he makes it his mission to halt construction by raising the Glamorous Arrow above his head, in accordance with Jinsy law. Unless Maven can persuade Molt to drop the arrow, the bridge project is dead in the water.

But Molt is a tricky customer, and won't be bought or bribed. In fact, the dedicated naturalist's only real desire in life is to see one of Jinsy's rarest creatures - the Ool Bat - in the flesh, having inadvertently killed one as a child.

Fortunately, Maven just happens to have an Ool Bat named Geoff living in his attic. All that remains to do is invite Molt over for dinner, show him the bat, and clean shoes are within the arbiter's grasp. But with erratic chef Reerdon Amblesea (Adam Gillen) in the kitchen, Maven and his guests will be lucky to survive the night...

Look out for an appearance from an almost unrecognisable KT Tunstall as soap-dodging singer Briiian Raggatan, who performs The Raggatan Riddle - an unforgettable ditty about a mysterious object. It's blue, wet, onion-like and runs right up the chimney. Any ideas?