With the pig postal system already causing him major stress, Maven is forced to deal with a renegade thrash-folk band and its enigmatic leader.
Preview clip 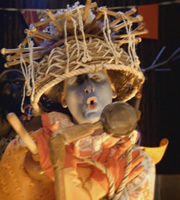 It's hard to believe that a postal system, which consists of pigs delivering parcels by sniffing the scent of their recipients could possibly go wrong. Yet that is the situation facing Maven. There have been incorrect deliveries all week, leaving Jinsy's arbiter with a porky problem that could take all night to solve.

But while Maven is planning to slave the night away in the Tower, his assistant Sporall is heading to the Moosic Tavern, where folk-thrash band, Mool Perpya, are set to perform. Dressed in wicker masks and led by mysterious rock god The Zoop, the band epitomise cool on Jinsy. The same can't be said of Maven, however, after his impromptu arrival at the tavern only elicits laughter and derision. Perhaps it has something to do with his flared safari suit and Cuban heels combo.

But the laughs don't last long. Maven promptly bans the band under a sub-section of the Ear Protection Charter. With that problem solved, he's free to turn his attention to the post office, where kindly postmistress Mrs Oon (Marcia Warren) seems frustratingly indifferent to his postal concerns. While waiting to speak to Oon, however, Maven discovers Mool Perpya are planning an illegal gig at Doker's Quarry, and goes into a tailspin. Perhaps some of Mrs Oon's special 'something and apricot' soup will calm him down. Then again, given its psychedelic properties, perhaps it won't.

With their arbiter as high as a kite and the illegal concert in full swing, the people of Jinsy are in a state of revelry. But nothing can prepare them for what's to come, as Maven takes to the stage to give the performance of a lifetime. It may not be pretty, but it's guaranteed to boil your ears...

The Voice of Miss Reason (Jennifer Saunders) is a familiar sound to all 791 of Jinsy's residents, making regular announcements via the tessellators. Whether it's the declaration of a jumper amnesty or warnings of a severe hotwave hitting the island, she keeps locals in the loop about island life.

This is Jinsy - Soup of the Gods

Maven, tripping out on soup, ends up singing on stage.