Comedy pilot written by and starring Justin Chubb and Chris Bran as Maven and Sporrall - the hapless adminstrators of Jinsy Island. 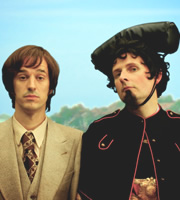 Maven and Sporrall watch over the residents of Jinsy, carrying out the instructions of the unseen but all-powerful 'Great He', dispensing punishment, propaganda and pelch to the 762 inhabitants of Jinsy.

Maven is agitated by a dirty spoon and is given the honour of making the inaugural speech at a ceremony linking Jinsy to Old Jinsy - a mythic place populated by barely civilised natives.