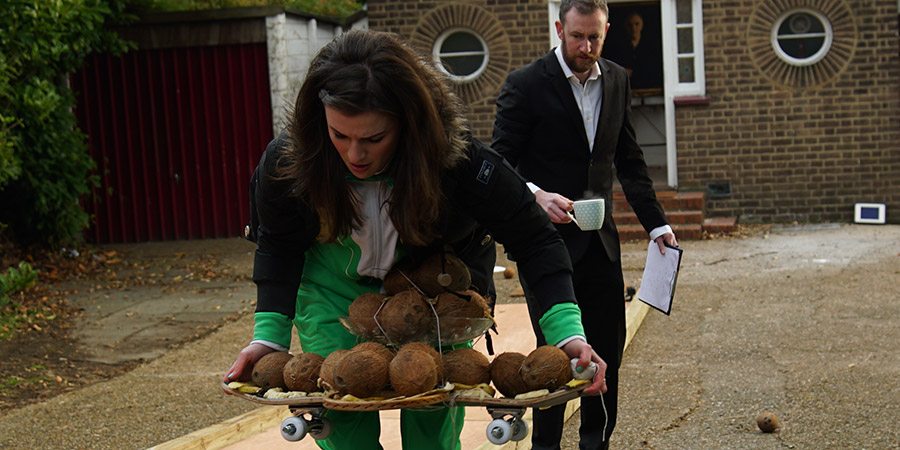 It's the semi-final and time is running out to claim the points needed to become the Taskmaster Series Champion. In this episode, Greg Davies and Alex Horne set the contestants a series of cruel conundrums: should Nish Kumar use the coconut harness? What should Sally Phillips do with a slice of bread when blindfolded? And who should they vote for in yet another referendum?
Preview clips

Task 1: Wearing that blindfold at all times, travel as far as possible in three minutes. Alex will be at your side at all times, because he is a strong, independent, handsome man. On removing the blindfold, you will then have another three minutes to retrace your steps to your starting position. Longest successful retracing of steps wins.

Live task: Send the most things to the Taskmaster. Items must travel via zip-line and land on your segment of the Taskmaster's table. You may not move from your current position. You have 100 seconds.

Get as far as you can blindfolded

In this clip, Aisling and Mark have some trouble retracing their steps once the blindfold is removed.

What Bob Mortimer can do with a banana is pretty impressive...

Sally Phillips had been rescued in the last task of the show by a member of the audience.

Greg revels in disrupting Alex's attempts to share the scores, using some interesting and questionable noises...