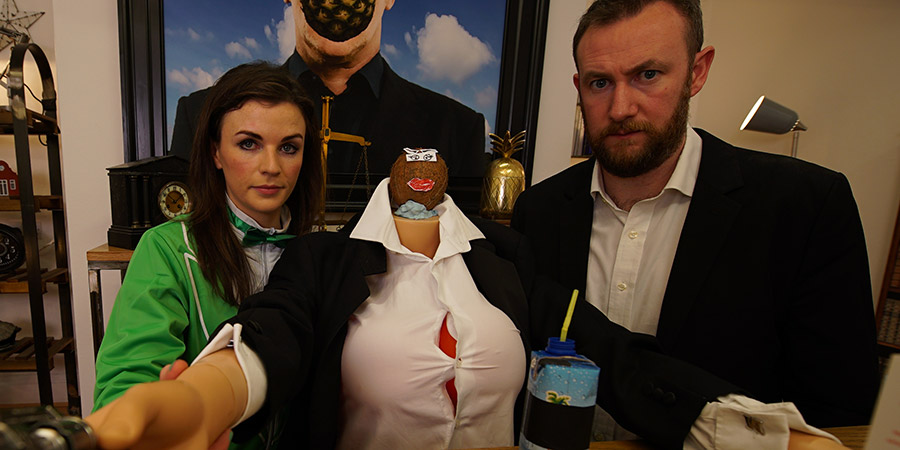 Sometimes with humour, more often with viciousness, Taskmaster Greg Davies continues to rank five comics in order of competency as they attempt complex assignments such as jelly-balancing and coconut costumery. Alex Horne, Greg's obedient private secretary in charge of data, is on hand to ensure everything runs smoothly. Also, Mark Watson tries to open an unlocked briefcase.
Preview clips

Prize task: Thing they are actually proudest off.

* Bob Mortimer: A spirometer he used after his heart operation to test his lungs. - 5
* Sally Phillips: A photo of her outside the Icelandic parliament, after she helped change the country's laws to improve the lives of pregnant women. - 4
* Aisling Bea: A cape made out of 12 Irish flags, which she wore during the Fringe show The Wrestling. - 3
* Mark Watson: His Celebrity Mastermind trophy. - 2
* Nish Kumar: A cricket trophy he won for "Clubman of the Year", which Nish discovered went to the person who showed the most enthusiasm in the face of, "an overwhelming lack of ability." - 1

Task 1: Remove the table tennis ball from the pipe. The pipe must not be moved. Fastest wins. Your time starts now.

Task 3 (A task in three parts, which can be completed in any order, involving a jelly, a Twiglet and a Weetabix): Part 1 - Standing behind this rope, throw one of the items into the bucket. You may retrieve the item if it misses, but you must stand behind the rope on every throw. You may not move the rope or the bucket. Part 2 - Eat one item. Part 3 - Balance one item on top of the red poll. The item must remain balanced until the entire task is completed. You may not take the poll out of the ground. All 3 - Fastest wins. Your time started when you opened the first task, and ends when you have completed all three tasks.

Live task: Play table tennis with words. When the table tennis ball is within striking distance, you must say a word while pretending to hit the ball with your bat. That word must begin with the last letter of the previous word. If you fail to say a word within the time it would take you to hit a table tennis ball, you are out. After saying your word, you must run to the back of the opposite queue as the task progresses. Alex will serve the first word to the youngest contestant. Last player standing wins.

Aisling Bea has to get a ping pong ball out of a tube without moving it. Touching is allowed, but moving it is not. Let's see how she gets on...

In this task Bob makes a coconut look like a business man...