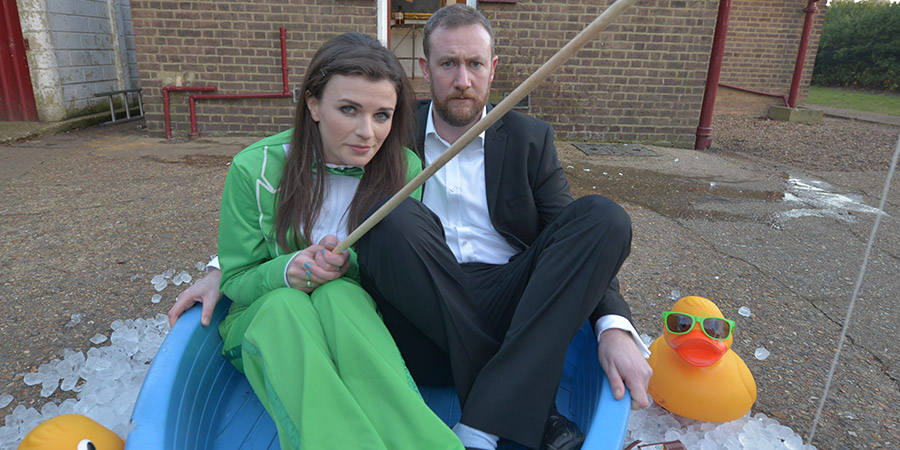 The series passes the halfway stage and the tantalising prospect of owning the Taskmaster trophy is getting closer for all five comic competitors who are not named Nish Kumar. Alex Horne risks the wrath of his fierce employer Greg Davies with an unsanctioned task; Sally Phillips locks herself in the caravan with an amorous watercooler and Aisling Bea crams an Italian entrée dish into a balloon.
Preview clips

* Sally Phillips: High-octane feed for show pigs. - 5
* Bob Mortimer: A rocket-bike he made for his son. - 4
* Aisling Bea: A custard pie on a garden rake. - 3
* Nish Kumar: A ten-year-old hands-free mobile phone kit, which is just a massive rubber band that cuts off the blood flow to your brain. - 2
* Mark Watson: A pair of trousers he stole from Greg. - 1

Task 1: Put the biggest thing inside this balloon. The balloon then must be successfully inflated, tied and bigger than your head. You have ten minutes. Your time starts now.

* Sally: Pretends to have sex with the water cooler in the caravan. - 5
* Nish: In slow motion, he performs a martial arts kick against the water cooler. - 4
* Bob: Finds an apple on top of the water cooler, and then splits the apple into two perfect halves with his bare hands. - 3
* Aisling: Fishing for a moment via a water cooler, intending to use Moments chocolates, but they were discontinued in the 1990s and thus she uses Galaxy. However, she knocks the cooler over, smashing a cup of tea on the ground. - 2
* Mark: Attempts to get the water cooler to travel across the country and spread the cooler across social media. However, it travels just 33 miles in five months. - 1

Bonus task: Send the Taskmaster an anonymous cheeky text message every single day for the next five months. Your time starts now.

* Mark: Disqualified for not sending a text on two days. - 0

Prize task: Find the Finns. You may each ask one question to one person. Your question must not pertain to the nationality of the people. You must then write which number you think is a Finn. Most accurate Finn finder wins.

The contestants have to create their best water cooler moment, which Alex Horne describes as 'a segment in a TV show that's worth discussing the next day, especially in the work place'.

The contestants have to build the tallest tower they can out of cans, whilst telling Alex Horne they are from a different country every 10 seconds.

After Mark Watson wastes 5 months of his life sending Greg Davies a text message every day, Alex Horne treats us to an extended reading of some of these text messages.