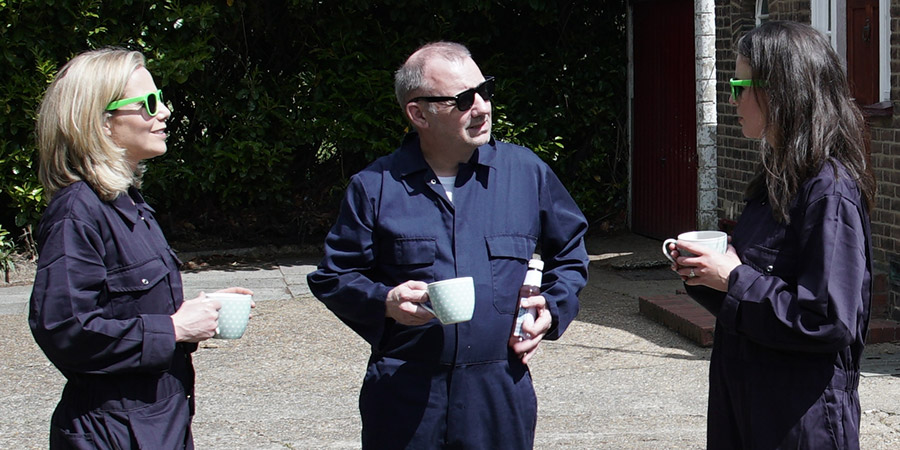 Series 5, Episode 4 - Residue Around The Hoof

The halfway point of the series approaches and the five task-hungry comics are being driven to ever more absurd lengths as they battle to lay their sticky fingers on Taskmaster Greg Davies's golden head. Mark Watson and Nish Kumar pop toast together and Sally Phillips spreads absinthe on it. And can anyone recognise Greg's loyal underling Alex Horne if he's wearing a hat?
Preview clips

* Aisling Bea: A bag of her own baby teeth. - 5
* Nish Kumar: A single man-made leaf from the set of Lord of the Rings. - 4
* Sally Phillips: Abba Monopoly. - 3
* Mark Watson: A Kuwait T-shirt, despite the fact he hasn't been allowed into Kuwait. - 2
* Bob Mortimer: A large Woody Woodpecker cuddly toy which he won at a holiday camp in Spain. - 1

Task 2 (Team Task): Do something remarkable synchronised. You have a maximum of 30 minutes. Most remarkably synchronised behaviour wins. Your time starts now.

Task 3, Part 1: Wearing this blindfold, blow up this balloon so that its circumference is the same as the length of a standard cucumber. You have one minute. Your time starts when Alex blows his whistle.

Task 3, Part 2: Spot the difference. Have a look at the scene in front of you and explain exactly what's changed since you put the blindfold on. You have two minutes. Your time starts now.

Tie-break task: Back-throw a picture of a Swede into a bin, while looking at a picture of the Taskmaster. Fewest attempts wins.

All the Marmite recipes are in the official Taskmaster book.

In this task, the contestants have to make their own Marmite...

Do something remarkable synchronised

In this task, Nish and Mark synchronise their breakfast eating.