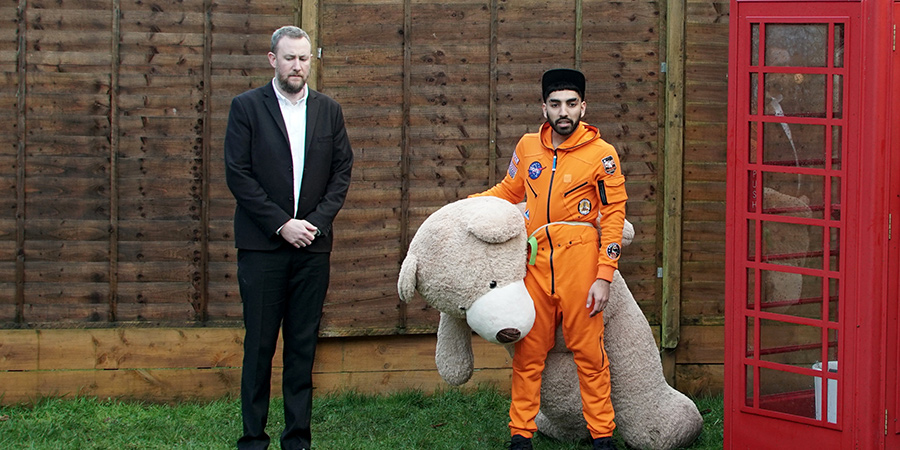 Hoping to impress the Taskmaster and be crowned the next champion are: Daisy May Cooper, Johnny Vegas, Katherine Parkinson, Mawaan Rizwan and Richard Herring. Wax seals will open, dreams will be made and/or broken, and Little Alex Horne will be wrapped around his master's little finger providing stats and moral support in the most ridiculous and ferociously fought game show on television.
Preview clips

Prize task: The nicest thing to put in your mouth.

* Daisy, Katherine, Mawaan and Richard: All in less than 10 seconds. Each wins a gigantic teddy bear.
* Johnny: 25 seconds. Wins a small teddy bear.

Task 1: Part 2 - Put all these drinks on the table in the caravan without spilling a single drop. Also, you must be clutching this teddy at all times. Also, you must not walk on the grass while holding drinks. Fastest wins. Your time starts now.

* Everyone spills some of the drinks. - 0

* Mawaan: Makes a cow that looks large disappear, but it is a small cow close to the camera that is moved out of shot. - 5
* Johnny: Performs a play in which Jeremy Corbyn summons a 200ft mutant chicken destroying London, where in reality a normal-sized prop chicken destroys a model version of London, and the chicken disappears behind a piece of blue paper being put in front of it. - 4
* Richard: Makes Little Alex Horne disappear using a mirror. - 2
* Katherine: Makes a sofa disappear by moving a partition in front of it. - 2
* Daisy: Makes a large cow disappear by moving into some bushes. - 1

Task 3: Land the most egg in the frying pan. You may not throw any egg. You must stay on this balcony and you may only use the contents of one of the boxes. You have twenty minutes or until you run out of egg. Your time starts now.

* Daisy: Bonus point for getting an egg closest to the pan.
* Johnny, Katherine, Mawaan and Richard: All landed eggs further away from the pan than Daisy. - 0

The contestants must carry some drinks, whilst holding a big teddy. Here's Daisy May Cooper giving it a go.

Everyone is left in fits of laughter after Greg Davies points out something crude about Katherine Parkinson's task attempt.

Task: Land the most egg in the frying pan

The contestants have to land an egg in a frying pan. Simple? No.

Taskmaster may have changed channels but it's still just as side-splittingly silly as before.

Bruce Dessau on doing the first Taskmaster in Edinburgh

Taskmaster began life as an Edinburgh Fringe show 10 years ago. Comedy critic Bruce Dessau, one of the first contestants, recalls the fun, chaos and rivalry.

First episode, as thoroughly entertaining as ever.

Channel 4's task in poaching Dave's best programme was simple: don't screw it up. And by barely changing a single thing for Taskmaster's tenth series, they passed with flying colours.

Sure, test and trace might be more medically useful, but would it be as much fun? Take your pleasures where you can.

So much fun, you could almost forget the pandemic.

That figure is roughly in line with what the show scored on Dave when catch-up viewing was also counted - which means the show is sure to grow its audience with the change in broadcaster, once on-demand requests are also counted. Channel 4 has also hailed the fact that the show won its 9pm slot among the key 16-34 year-old demographic.