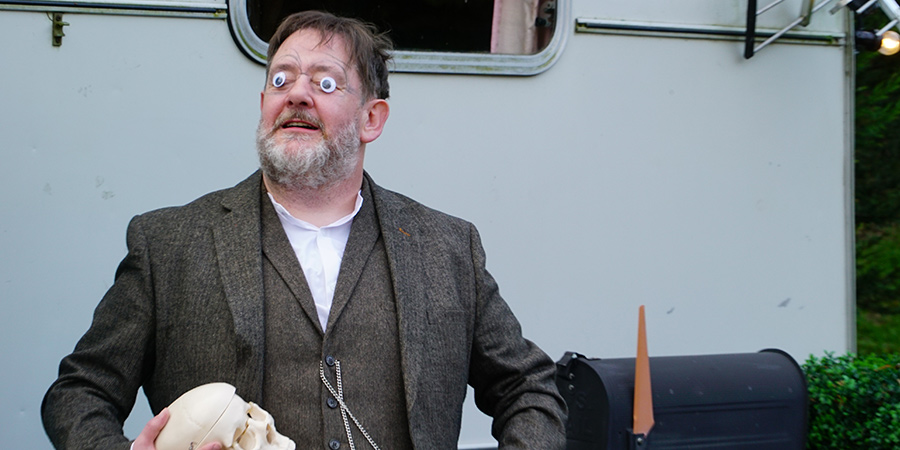 * Richard Herring: Histor, the one-eyed pirate crow from This Morning With Richard Not Judy. - 5
* Mawaan Rizwan: A painting he made of his favourite fried chicken shop, Ferfect Fried Chicken. - 4
* Katherine Parkinson: A dead wasp. - 3
* Daisy May Cooper: A panty liner. - 2
* Johnny Vegas: A plate of chips. - 1

Task 1: Fill this cup so that it overfloweth. The cup must remain atop the cup pole at all times. Only liquids may touch the red green. Fastest wins. Your time starts now.

* Everyone touches the red green or allows something other than liquid to touch the red green, and thus everyone is disqualified. - 0

Task 2: Learn your lines. You have ten minutes to prepare for each of your parts, then one take to pull it off. Best performance wins. Your first ten minutes starts now. [Bonus rule: Everyone is learning two parts, except Richard who is learning five parts.]

Task 3: Drink one full tablespoon of coconut water. If you use the same coconut water extraction method as another contestant, you will both be disqualified. Fastest wins. Your time starts now.

Live task (Team Task): Stare at your opponent without blinking. You must both be pulling the face that the Taskmaster chooses. First person to blink, look away or do the wrong expression loses. Each team member gets two points for each team victory.

No one manages to get any points.

Who can keep their eyes open the longest?

Greg Davies doesn't hold back in his withering contempt of the contestant's efforts, declaring himself to be the most bored out of all 10 series.

Outtake: Alex Horne does not like to be touched

Alex Horne shares his discomfort about being hugged by Katherine Parkinson.