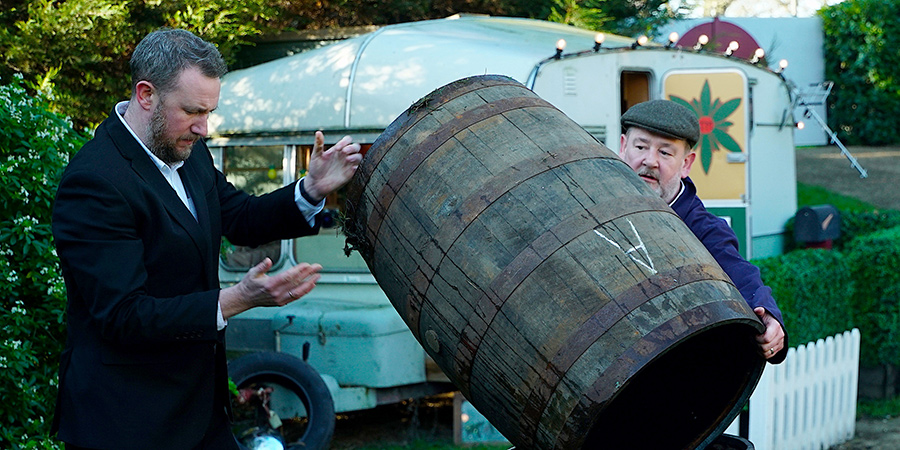 The second half of the comedy challenge series kicks off here, and it looks as if four of the contestants still have a good chance of lifting Taskmaster Greg Davies's golden head in the final - regular viewers will no doubt have guessed whose chances are looking rather more bleak. This week, Daisy May Cooper gets rather cross, Mawaan Rizwan learns a lesson about waterfowl and Richard Herring wrings out a wet sock.
Preview clips

* Mawaan Rizwan: A shrine to himself he made when he was 16. - 5
* Johnny Vegas: A selection of Lego figures of himself. - 4
* Katherine Parkinson: A case of her face, which she painted herself. - 3
* Daisy May Cooper: A sculpture of herself used to promote This Country. - 2
* Richard Herring: A jigsaw of himself. - 2

Task 1: Silently, make the tastiest and prettiest cocktail with the coolest name. If you make any noise over 60dB you most pour anything you've prepared into the bucket and shout the following phrase at a volume of over 100dB - Daisy: "I love this." Johnny: "I've done it again." Katherine: "Woof". Mawaan: "I'm so sorry." Richard: "Failure." - and start again. You have twenty minutes. Your time starts now.

Task 2: Draw the animal that is watching you. The animal is wearing a hat. You may not leave this room and you must look in the mirror at all times. Most accurate drawing wins. You have five minutes. Your time starts now.

Task 3: Get the most water from butt A into butt B. You may not move a butt in the first five minutes. You have ten minutes. Your time starts now.

Live task (Team Task): Draw the animal named on your card. Each artist may draw three straight lines on their turn. That artist's teammates may have one guess after these three lines. If the guess is incorrect, the other team's artist can draw their straight lines. You may not speak or communicate with your teammates in any way. Each team member gets two points for each team victory.

Greg Davies fumbles his words and loses his marbles.

Get the most water from Butt A to Butt B

Richard Herring and Daisy May Cooper attempt to get the most water from one water butt to another.

Make a cocktail as quietly as possible

How quietly can a drink be built?