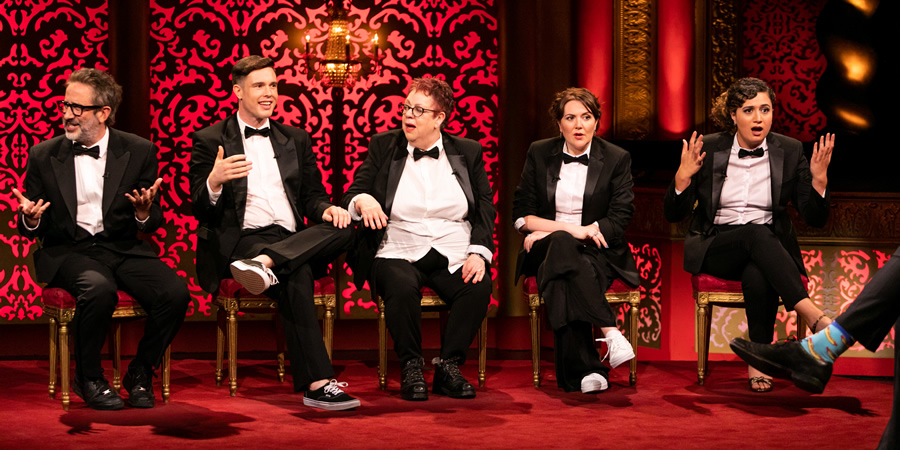 Series 9, Episode 10 - Think About The Spirit

Five comedians had one dream: to become the Series 9 Taskmaster Champion. Now it's the Grand Final and after nine gruelling episodes that precious dream is still alive for all of them - bar one. Alex Horne has the stats handy as they ponder peas, teas and absent keys.
Preview clips

Prize task: Best thing that is very long and thin.

* Katy Wix: A copy of War and Peace, with the pages torn out and then stuck top-to-bottom, so they now form one really long piece of paper. - 5
* Jo Brand: A jumper she made at university, out of a long piece of wool. It is the only thing she has ever knitted. - 4
* David Baddiel: A 17.4m long tin-can walkie-talkie. - 3
* Ed Gamble: One strand of spaghetti that is so long it could constitute as a whole portion. - 2
* Rose Matafeo: A lasso made out of strawberry laces. - 1

Task 1: Do the most preposterous thing with this chickpea. You have 20 minutes. Your time starts now.

Task 2 (Team Task): Make the best cup of tea in this teacup. You must use all the equipment on the table [which is locked down onto the table]. You must not use anything from the kitchen. You must wear the washing-up gloves throughout the task. Best cup of tea wins. You have a maximum of ten minutes. Your time starts now.

Task 3: Complete the seven tasks. When you touch a task in any way, you must complete it before looking inside another task. Fastest wins. Your time starts now. The Seven Tasks (starting from the bottom of the circle and going clockwise, but could be done in any order): I - Complete the jigsaw. II - Hide all the jigsaw pieces around the garden. III - Put this wheelbarrow in the caravan. The wheelbarrow must stay in the caravan for the rest of the task. IV - Put 20 things all bigger than a tennis ball in the wheelbarrow. V - Roll the bowling ball from behind the rope at the top of the drive, so it knocks over at least one of the skittles in front of the front door. VI - Build a tower of bricks on this red circle. The tower must be at least 26 inches high and must remain standing until all the tasks are complete. VII - Place one of your hands on your hips and keep it there until you have completed all of the tasks.

Tie-break task: Make a pop-up toy pause for the longest before it pops up. You may use one of the spreads provided to make your pause longer.

Ed Gamble does something preposterous with a chickpea

You'll never guess what Ed Gamble does with a chickpea... it's pretty preposterous.

Jo Brand and David Baddiel work together to make Alex Horne the best cup of tea.