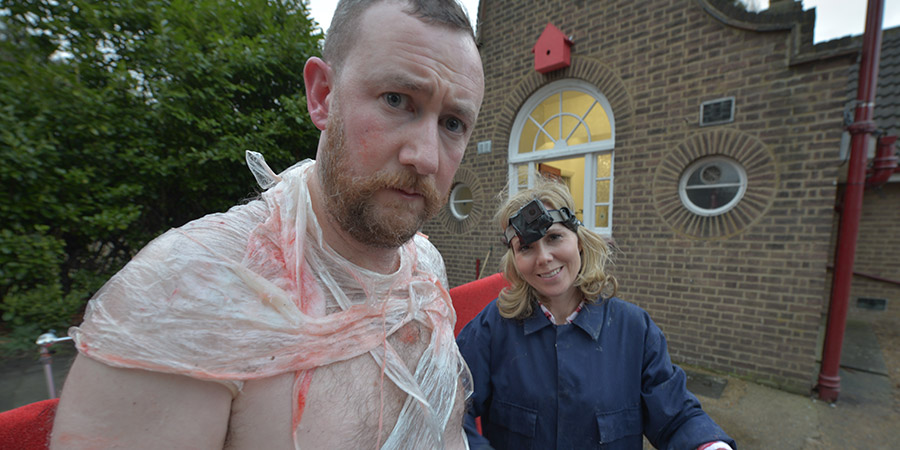 Taskmaster Greg Davies's little assistant Alex Horne decides it's time for a style makeover, but will it meet with his boss's approval? Meanwhile, with just three shows left, the five comics continue their quest to win a golden likeness of Greg's imperial skull. Bob Mortimer champions sausage meat, Sally Phillips returns to the womb and Greg has a heart to heart with Nish Kumar.
Preview clips

Prize task: Best thing they have made themselves.

* Bob Mortimer: A sausage / pork pie presentation unit. - 5
* Aisling Bea: A vegetarian sausage roll. - 4
* Nish Kumar: A T-shirt with the faces of all the players and hosts dubbed, "The Taskmaster Seven". - 3
* Sally Phillips: A birdbath, which is really a plunger with some plastic flowers tied to it. - 2
* Mark Watson: A 4,000 piece jigsaw of Greg's face. - 1

Task 1: Balance Alex. You have ten minutes to place your counterweight at your end of the see-saw. You may not use humans to balance Alex. Most balanced Alex wins. Your time starts now.

Task 2: With this camera strapped to your head, record the most incredible footage. You have ten minutes to plan your footage, and ten minutes to record it. Your time starts now.

* Sally: The birth of Alex. - 5
* Aisling: A parody of the film Taken. - 4
* Bob: Rummaging through a box full of Wotsits which also contains Bob's head. - 4
* Mark: Watching a film of a motorbike travelling through a forest. - 4
* Nish: Nish filling out a Su Doku incorrectly. - 1

Bonus task: Have your photo taken with this golden pineapple and other esteemed company. Best portfolio of pineapple photos wins. You have six months. Your time starts now.

* Aisling: She sent the pineapple to her mother Helen in Kildare, Ireland who took photos of it on her iPad. - 0

Task 3: Using this flame, light the candle in the caravan. Fastest wins. Your time starts now. [Rule only for Mark: Also, please don't say any words containing any of the letters in the word "Taskmaster".]

Live task: Make yourself monotone. Most monotone after 100 seconds wins.

Tie-break task: Get the most yoghurt onto the middle of a target on a wall, with one good kick.

* Sally - Wins after a member of the audience suggests Bob should win.

Nish Kumar blows out a candle

Sally and Nish try and transport a candle without blowing it out. Nish has some difficulty.

Greg gives Nish Kumar a pep talk to encourage him to 'really give the show a go'.

Mark Watson does an impressive kick to get a yoghurt pot in the centre of a target. Alex Horne describes it as 'the best thing he's ever done'.