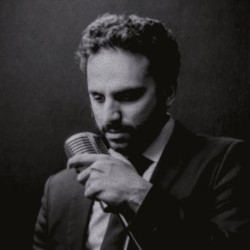 After the massive sell out success at last year's Edinburgh Festival of his critically acclaimed fourth solo show Ruminations on the Nature of Subjectivity (and one of the Top 10 most reviewed shows at the Festival), Nish Kumar is back for his 10th Edinburgh Fringe with his new show Long Word Long Word Blah Blah Blah I'm So Clever to the Pleasance Courtyard Upstairs venue. This follows on the footsteps on yet another sold out Soho Theatre run in London where he recorded his forthcoming DVD, directed by The Pajama Men's Shenoah Allen.

In the new show Nish asks - does comedy need to be politically neutral? Why is comedy leaning to the left and is that even a problem? He examines the changing political landscape and how as we've become more liberal in our outlook on social issues, we've become increasingly conservative economically. He looks at a world in which a black James Bond seems achievable, but at the same time our financial system seems to be based entirely on the game Monopoly. And he asks whether the left is worse at branding its ideas than Islamic fundamentalists.

A cracking start to 2015 he is due to perform on The John Bishop Show for BBC1. Last year was a stellar year for Nish, with a BBC Radio 4 project incoming, The Now Show, a regular writing spot on the recently re-released (and namesake) show The Kumars (Sky One) and the step over to the small screen on The Alternative Comedy Experience curated by Stewart Lee for Comedy Central, appearances on Edinburgh Comedy Fest live (BBC Three), Alan Davies As Yet Untitled (Dave) and Sweat The Small Stuff (BBC Three). He is also a regular on Josh Widdicombe's podcast.

At the end of last year Nish embarked on a tour of India with the Melbourne International Comedy Festival Roadshow. This year he supported Milton Jones and next month he heads out to the New Zealand Comedy festival. Nish just finished 6 weeks as Radio 4 Extra's host taking over from Romesh Ranganathan on Newsjack and will be hosting the next series in the autumn and is due to perform on the forthcoming series of Russell Howard's Comedy Central Show.

In 2012 Nish took on the role of series warm-up for channel Dave's One Night Stand that saw him play to full capacity theatres such as the Hackney and Shepherd's Bush Empire. Following this, Nish went on to storm the 2012 Edinburgh Fringe Festival with his aforementioned debut solo show, Who Is Nish Kumar? earning a plethora of brilliant reviews and a spot in the top ten of Channel Dave's 'Ten Funniest Jokes of The Fringe.' Following his solo Fringe debut success, Nish appeared on BBC Radio 4 and the BBC Red Button as part of 'Fresh From The Fringe', completed two sell-out runs at the Soho Theatre with Who Is Nish Kumar? and received a nomination for Best Show at the Leicester Comedy Festival 2013.

Alongside his flourishing stand-up career, Nish has also starred in a number of comic plays including The Hotel at the Edinburgh Fringe in 2009 for which he had a key role and in Wardens at the 2013 Fringe Festival which he did alongside his second solo and critically acclaimed show, Nish Kumar Is a Comedian which he also took to acclaimed comedy haunt The Soho Theatre for a two week run in late 2013.