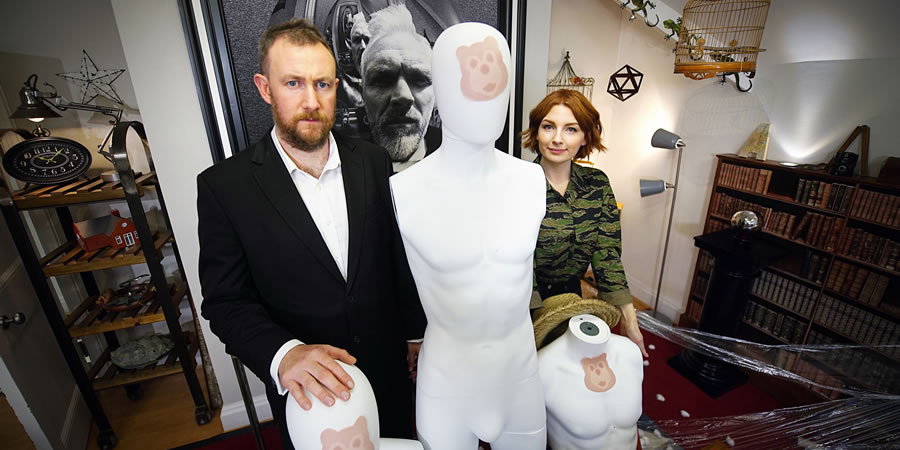 Series 6, Episode 6 - We Met At Mealtimes

This week it's snowy globes, rubbery ducks and wooden-y spoons as all five competitors attempt to impress Greg with their creativity and ingenuity while Alex Horne provides crucial data analytics.
Preview clips

Task 2 (Team Task): Knock over as many ducks as possible. You must all remain on the red carpet throughout the task. You have five minutes. Your time starts now.

Task 3: Make an announcement. Biggest announcement to the most people wins. You have 12 weeks. Your time starts now.

* Asim: Announced that he was a vegan in the previous episode of Taskmaster, which he no longer is. - 5
* Tim: Tried to make a big version of the word "Announcement" at Bristol Airport, but only got as far as "An" before the police arrived. - 4
* Liza: People making a series of big announcements on her radio show. - 2
* Alice: Tweeted: "BIG ANNOUNCEMENT: Quattro Formaggio pizza has 4 TYPES of cheese, not 4x cheese (aka extra extra extra cheese...aka more cheese than bread). I would not like to disclose until when I held this false knowledge. How did I never encounter the truth!?!" Got 11 retweets and 411 likes. - 2
* Russell: Went to India and shouted to some dogs to be quiet, which they didn't do. - 1

Task 4: Make the best parachute for this wooden spoon. You have ten minutes to order your materials, and then ten minutes to make your parachute. Slowest and most dramatic fall wins. Your time starts now.

Live task: You will each be given a category. You each have ten seconds to say things that fall into that category. First, you must each predict how many correct answers you will give. The person who has successfully predicted the highest number wins.

The Taskmaster contestants are tasked with 'making a big announcement', in this clip from series 6 episode 6 we see how Tim Vine got on, with a little help from his friends...

Tim Vine and Liza Tarbuck show us their attempt at making a snow globe, without snow.

Alex Horne shares his 'joy dance' that he's prepared specially for the audience, while Greg Davies sings an accompanying song.