The family celebrate the baptism of Dermot and Maria's triplets with a party, and the hypnotist puts Agnes and Winnie under his spell.
Preview clips 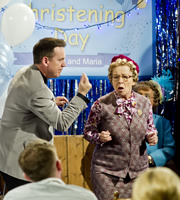 The Brown family are celebrating the christening of Dermot and Maria's triplets. As a treat, Maria's mother Hillary has thrown the couple a party in Foley's and hired a hypnotist to provide the entertainment.

The hypnotist uses key words to enchant his volunteers into behaving very strangely. But when they wake up from hypnosis the volunteers have no memory of their behaviour. Unbeknownst to Agnes and Winnie, the hypnotist has them both under his spell!

After an evening drinking champagne at the Nicholson's house, Cathy comes home raving about Mrs Nicholson's kitchen. A miffed Agnes isn't impressed, but when her own kitchen starts to fall apart, she finally accepts that it could probably do with a bit of an update.

Agnes decides to ask carpenter son Mark to do the kitchen renovations, whilst Dermot has an unusual job offer for Mark's wife Betty. However, Mark and Betty have other things on their mind: Mark's been made redundant, so he, Betty and their son Bono have decided to move to Australia.

A clearly heartbroken Agnes takes the news in her stride, but there's one person who refuses to keep his feelings hidden: her grandson Bono. However, after realising that Agnes is still hypnotised, Cathy knows exactly how to cheer Bono up. But when Father Damien pops in to offer Agnes counselling, he is unaware that she is still under the hypnotist's spell...

After being hypnotised, Mrs Brown believes she's a dog every time she hears the trigger word 'triplets'.

Mrs Brown Does a Striptease

After being hypnotised, Mrs Brown believes she is a stripper every time she hears the trigger word 'baptism'.

Mrs Brown invites Ken and Barbie to have a cup of tea.