It's a stressful day for Agnes, as everything seems to be happening all at once. Rory and Dino have had a huge falling out, and Mark and Betty have got their emigration visas and are off to Australia.
Preview clip 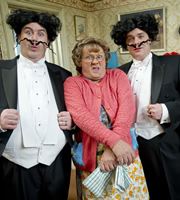 In fact, it seems like the only thing not happening is Buster starting work on Agnes' new kitchen... possibly because he's been too busy purloining a new smartphone for Dermot.

Cathy becomes suspicious after a secretive Agnes takes a phone call from a solicitor. After some investigating, Cathy discovers that the solicitor's firm specialises in adoptions and before long Agnes' children are all left wondering who is really a Brown after all.

There's a shock for Cathy as a blast from the past appears out of the blue. Meanwhile, another familiar face turns up at the Brown household as Father Quinn returns from rehab to ask Agnes to volunteer at his annual Garden Party. However, with Dermot's new smartphone distracting her, Agnes struggles to get her answer out...

Agnes is in for a huge surprise when Rory and Dino finally patch things up. However, it appears that Mark and Betty have some even more surprising news...