It's all change in the Brown household as two of Mrs Brown's boys finalise plans for their new homes.
Preview clip 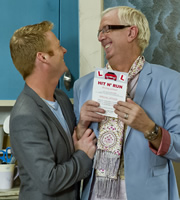 Mark is busy collecting the relevant documents for his family's imminent emigration to Australia. Rory and Dino have found the perfect apartment in Kilbride. However, moving so far from home means that Rory is going to have to learn to drive, and his driving lesson didn't go particularly well the last time he tried...

Cathy's life might also be about to change as boyfriend Professor Thomas Clowne announces he has a surprise proposal for her. However, with Agnes around, it's very difficult to get a word in edgeways. Concerned that she isn't good enough for Thomas, Cathy confides in her mother that she's thinking of having breast enhancement surgery. Agnes tries to hold her tongue, but it's quite obvious she thinks Professor Thomas Clowne isn't good enough for her daughter.

Against her better judgement, Agnes gives Buster the chance to quote for the job of upgrading her kitchen. However, when the draughtsman turns up to measure the kitchen and isn't quite up to the job, Mrs Brown quickly regrets the decision. Will she ever have the new kitchen she desires?

Cathy pays a visit to the doctor to enquire about breast enlargements and is given a 'size-decider' to test out different dimensions. However, despite Cathy wanting to impress Thomas with her new 'assets', it's Agnes who makes the biggest impression when she gets her hands on the device...