Agnes Brown has family troubles to contend with: her son Dermot has fallen out with Maria Nicholson, his long-term girlfriend, and Grandad is feeling poorly.
Preview clips 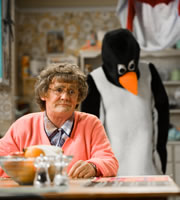 After a sleepless night, Mrs Brown decides to try to sort out Dermot and Maria's problem by giving Maria the benefit of her advice. But her heart-to-heart with Maria only succeeds in making the dispute worse.

Mrs. Brown takes it upon herself to talk to her son Dermot's girlfriend Maria about their relationship problems, but only manages to make matters much worse.

Distracted by family drama, Mrs. Brown isn't concentrating when she picks up the phone. Unfortunately she's forgotten that daughter Cathy has left her personal taser charging.

Mrs. Brown has left her handbag at home. However, she isn't afraid to remind us that her show is a live studio sitcom and the pub is closer to her house than you might imagine.