Agnes and Winnie gatecrash Maria's hen party, but realise that they have the wrong venue. Later, having invited Maria's snooty mother Mrs Nicholson to dinner, a nervous Agnes shores up her confidence with alcohol, but chaos ensues as the evening proceeds. 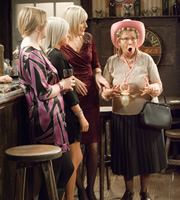 It's the week of Dermot's fiancée, Maria Nicholson's, hen party, as the comedy written by and starring Brendan O'Carroll continues. Agnes Brown and her friend Winnie are excited about going ... until daughter Cathy tells them they are not invited because they are too old. Undeterred, Mrs Brown decides she'll crash the event and show the girls that she and Winnie are not too old to party. All she has to do is find out where the party is being held. Agnes thinks her luck is in when son Dermot tells her that the girls are meeting at local pub Foleys. But when Agnes bursts into the pub in full hen party attire it becomes clear that Dermot may have misinformed her.

That night, Agnes mistakenly invites Maria's snooty mother, Mrs Nicholson, to dinner. Finding out that Mrs Nicholson is so sophisticated that she has two toilets in her house, Agnes has one fitted in an understairs cupboard in order to impress her guest. Despite this, and despite drafting in Rory's cordon-bleu friend Dino to cook dinner, on the night Mrs Brown is incredibly nervous and turns to drink. With Mrs Brown increasingly desperate to delight Mrs Nicholson, the evening descends into chaos as the drink takes hold, the aftermath of Agnes's hen party mistake plays out, and Grandad decides to go to the toilet in the wrong cupboard.

This episode was scheduled to begin at 22:35 but was delayed due to earlier over-running programmes.