Series 1, Episode 5 - Mammy Of The Groom

With his wedding only days away and tensions running high, Dermot suffers some pre-wedding jitters and takes refuge in a cupboard. Will Agnes be able to coax her son out in time for his nuptials? Meanwhile, Cathy gives her mother a book on homosexuality, leading Agnes to wonder who in her family is gay. 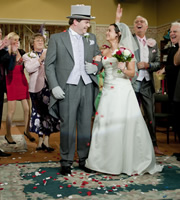 Dermot and Maria's wedding is just days away and tensions are running high in the Brown household, as the comedy written by and starring Brendan O'Carroll continues. The groom is getting cold feet and his best man, Buster, can't find anything good to say about Dermot in his speech. To cap it all Agnes Brown is mystified as to why her daughter Cathy has given her a book on homosexuality. Is she trying to tell her mother that one of the family is gay?

When Dermot's pre-marriage nerves get the better of him, he does what he always does when stressed: he locks himself in the cupboard. Father Quinn is bemused to have to give Maria and Dermot their pre-marriage talk in slightly unusual circumstances - with the mother of the groom in attendance and the groom in the cupboard. If Dermot won't reappear for the priest, how on earth is Agnes going to persuade him to come out in time for his wedding?

Meanwhile, Agnes Brown goes on a hunt for the homosexual in the family. Eventually she realises who it is. With help from Cathy and a greetings card, Agnes reassures them, and herself, as only she can.

This episode was scheduled to begin at 22:35 but was delayed due to earlier over-running programmes.