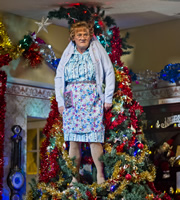 With the festive season fast approaching, Agnes Brown finds herself facing her busiest Christmas yet.

Spiritual son Trevor is visiting from the missions, grandson Bono is sleeping over on Christmas Eve, and there are three new faces to feed on Christmas Day now that Agnes's youngest son Dermot is the father of triplets. But first things first - Agnes must finish the simple task of decorating the tree.

And it seems as though Christmas in the Brown household is only going to get busier. When visiting, priest Father Damien announces that the Finglas Nativity play has been cancelled. Agnes vows to stage a Nativity play of her own in the local community centre. However, she meets stiff resistance from Father Damien, who is wary of meddling mothers like Agnes and refuses to ask permission from the Bishop. But nobody ever says no to the formidable Agnes Brown.

Cathy is furious when she discovers that Agnes has been reading her mail and decides to play a prank on her interfering mother. Convinced that she has been entered into a 'Best Christmas Mother' competition, Agnes starts being unusually nice to everyone - even Granddad! And Cathy isn't the only one playing tricks. Agnes gets her hilarious revenge on Dermot's snooty mother-in-law Hillary Nicholson after she scoffs at the idea of Agnes playing the Virgin Mary.

Plus there are plenty of other Christmas crises for the Brown family. Who will Buster and Dermot get to play Santa in their Christmas Grotto? Will Rory take Dino to the hairdressing award ceremony? But most importantly - will Agnes ever get to play the Virgin Mary?

Grandad has fallen asleep sitting on Hilary's mobile phone. When Hilary hears her phone ringing, she has no choice but to take the call from Grandad's lap...

Mrs Brown and the Christmas Turkey

Dermot comes home from work as a turkey to see his mammy - Mrs Brown makes him the perfect snack.

rs Brown reveals her feelings on post delivered to the Brown household. It's family mail that the family can open.