With Christmas finally over, most mothers would seize the chance to relax - but not Agnes Brown. After getting permission from the Bishop to stage her Nativity Play, Agnes has now finished her script and rehearsals are in full swing.
Preview clips 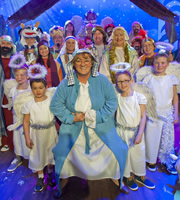 With Christmas finally over, most mothers would seize the chance to relax - but not Agnes Brown.

After getting permission from the Bishop to stage her Nativity Play, Agnes has now finished her script and rehearsals are in full swing. Having cast herself in the lead role of the Virgin Mary, Agnes is determined to make her version of the Nativity unforgettable. And judging by the unusual props she's created, it most certainly will be...

But prop-making is the least of Agnes's worries: friends and family are nagging her for parts and Father Damien still hasn't approved the script. And, seeing as Agnes has taken quite a bit of dramatic licence with the traditional Nativity story, it's looking like he might never approve it. But worst of all is the news that Father Damien has offered the part of the Narrator to Agnes's posh nemesis Hillary Nicholson!

As if there wasn't enough going on, poor Agnes is suffering from rheumatism in her wrist. When Dr Flynn's remedy fails to improve the situation, an unlikely hero in the form of Buster Brady appears with a homeopathic solution. However, as with all of Buster's ideas, his solution isn't particularly standard...

But nothing is going to stop Agnes from putting on her Nativity Play. With some surprising casting decisions and ambitious stunts, her unique take on the old-time tale will be a show that the residents of Finglas will never forget. Fire extinguishers at the ready.

Mrs Brown stars as the Virgin Mary in the local nativity play.

To prepare for her role as the Virgin Mary, Mrs Brown & Grandad use their special 'baby cannon' to bring the baby into the world...

Mrs Brown has been given a magnet to help ease her rheumatism. The only issue is that this one is meant for horses, not humans...