It's Agnes Brown's anniversary and she's in a great mood. However, she would be in an even better mood if she could just find someone to look after Grandad for a couple of weeks while she treats herself to a holiday.
Preview clips 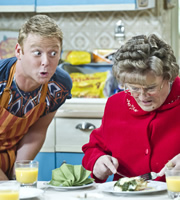 Private nursing homes are too expensive and Winnie can't take him in case Jacko is let out of hospital. Perhaps Doctor Flynn might be able to arrange some respite care?

Rory and Dino's new apartment isn't ready yet so Mrs Brown kindly invites them to move in with her for a couple of weeks. However, she's soon spitting feathers when Dino starts taking over the house. But that's nothing compared to how she might react if she ever found that the pair don't sleep in separate bedrooms.

When Dr Flynn reluctantly agrees to have Grandad tested for dementia, Mrs Brown devises a cunning plan to make sure Grandad fails the test and is sent for respite care. But when the health tester arrives, Grandad isn't the only person he's concerned about...

Meanwhile, Agnes is furious when Rory picks her rival Hillary Nicholson as his model in the hairdressing competition. However, Rory has a nicer surprise for his mother as well: he's arranged a psychic to contact her late husband Redser. Agnes is sceptical until Redser's spirit reveals some very ominous news.

Agnes is desperate for a holiday but cannot find anyone to look after Grandad.

Agnes is confusing Grandad in an attempt to get him into an old people's home.

Agnes is sceptical about psychics, but caught unawares, she gives it a go.