As Valentine's Day approaches, love is in the air for all the Brown family - even Grandad. In fact, the only Brown without a date is Agnes.
Preview clips 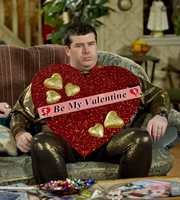 Under pressure from daughter Cathy to find a man, Agnes considers giving internet dating a bash. But son Dermot is not happy about the idea of his Mammy going on a date...

Betty, Cathy and Maria decide to forget about men for the night and go on a girls' night out - but not before having a good blether about their boys in Foleys. After overhearing their conversation, Dermot realises that he needs to make a grand gesture to remind Maria how romantic he can be. Buster has a great idea to impress Maria, but will it turn out to be a disaster, like Buster's other great ideas?

Betty's son Bono has started asking about the birds and the bees, so Betty has bought The ABC of Sex to help her explain things. But when Agnes and Winnie get hold of the book, they have even more questions than Bono. Meanwhile, Grandad gets hold of some Viagra...

Will Dermot prove himself to be an old romantic? Will Grandad ever put the Viagra bottle down? And most importantly, will Agnes find a date for Valentine's Day?

Agnes takes on the World Wide Web in search of love, but finds something she wasn't expecting...

Mrs Brown Prepares for a Date

Agnes is preparing, practicing and daydreaming about the evening ahead...