In this original award-winning episode, Mr. Bean takes an exam, sunbathes and goes to church with Richard Briers - driving badly all the way! 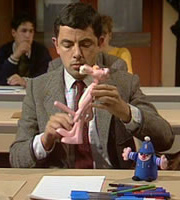 Bean is sitting a maths exam, and has brought his lucky Pink Panther model which he amuses himself with for a while. To his horror finds that he doesn't know the answers to the questions, and after being very upset, tries to find many creative ways to gain the answers.

Bean is at the beach, and wants to change into his swimwear without the man next to him seeing his modesty! Many rounds of acrobatic changing ensue as he tries to put his swimwear on without first taking off his trousers, which turns out to be a wasted effort as the man is blind!

Bean is at a church service, finds it hard to keep the proper etiquette. He doesn't know how to handle a sneeze and the resulting mess, much to the disgust of the very well-bred man next to him. He then tries to stay awake and ends up in all manner of strange positions, again to the disapproval of the man next to him. Finally, he enjoys singing along to one of the hymns with gusto, except that he hasn't got a hymn book with him, but he joins in loudly and tunelessly with the bit he can quickly pick up.