In this escapade, Mr. Bean buys a TV and a new camera, has an itchy foot and goes on a date.
Preview clip 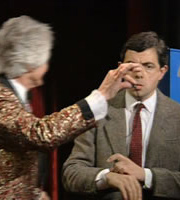 Bean has bought a new television! However, plugging it in and tuning in the aerial are not the simple tasks they might seem (to normal people) and after managing to power it up, Bean spends a great deal of time indeed trying to gain a decent reception for his television.

Bean acquires a Polaroid camera and finds such a simple device complicated to operate! He finds a man to supposedly help but who runs off with it, so Bean captures him in a bin; the identity parade involves him borrowing a pen to stab the men to recognise their screams.

Bean loses a shoe on top of a car(!) and spends a while hopping around to get it back. He then goes to Club Phut, where he is chosen to assist the magician with his act. Bad choice, magician! Bean doesn't understand the subtleties of magic and ruins the show.

Bean then moves onto a rather cheesy nightclub, where he tries to dance impressively, and ends up falling over. He accidentally gropes another man whilst trying to dance seductively for his lady of interest, who then dances with someone else. So Bean turns off the mains power in the club.

Mr Bean goes on a date