Thanks to some ingenious driving, Mr. Bean gets to an appointment with the dentist after oversleeping. He also has trouble in the park with a bothersome wasp, and meets a child with a remote-controlled boat. 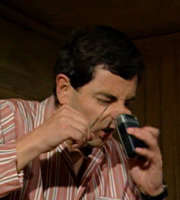 Bean has set himself a plethora of alarm clocks and other ingenious waking-up devices, all of which he ignores and switches off because he's feeling tired. He walks into the wall to refresh himself, but as he gets ready for the day he realises that he's slept in! He then has a little flap when he realises he's going to be late for the dentist, so cleans his teeth whilst getting dressed, whilst driving there! Bean then amuses himself playing with the equipment much to the irritation (and injury) of the dentist, who is given a general anaesthetic by Bean!

Bean goes to the park in the afternoon and causes yet more mayhem. He tries to drive a remote control boat and instead finds himself controlling an automatic wheelchair, tipping the occupant into the lake after an exciting windy ride! He meticulously sets out his picnic and foils a car thief by bringing the steering-wheel out with him to the picnic. He is joined on his picnic by a bee, which causes much trouble in the air, and inside Bean's mouth, ear, and trousers! He eventually kills the bee and is then chased away by a whole swarm of them!