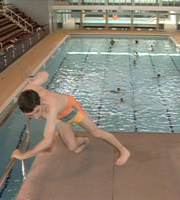 Bean goes to a swimming pool and, after being told off by the lifeguard for trying to go down one of the children's slides (if only the lifeguard knew just how suitable it was for him!) he attempts to dive gracefully off the diving board. Only he doesn't realise that he doesn't like heights until he reaches the top! He manages to fall off after much deliberation, only to discover that he's lost his swimming trunks! He hides from the lifeguards whilst they clear the pool but he runs stark naked into a group of girls entering their swimming class!

Bean sits on a park bench and begins to make an ingenious lunch! He uses scissors to cut up a fresh loaf of bread, a credit card to spread butter on it, washes lettuce leaves in the drinking fountain and dries them in his sock! Add very freshly killed anchovies...!

Bean goes to watch a horror movie with his girlfriend, but doesn't want to share his popcorn. He enjoy scaring his girlfriend with noises and actions before the film starts, but when it does begin, he finds the film a very scary experience indeed and he slides off his seat.