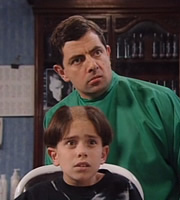 The blunderingly inept master of disaster goes for a haircut, but ends up styling the other customers' hair before causing chaos at a school fun day.
Preview clip

Some websites erroneously claim this episode to have been broadcast on Friday 17th November 1995.

Originally produced as a VHS-exclusive episode in 1995, Hair By Mr. Bean Of London was not broadcast until 25th August 2006. This was on children's digital channel Nickelodeon, and as such remains the only Mr. Bean episode not to have been premiered on free-to-view terrestrial television.

Mr Bean goes to the barber for a haircut. When he mistaken for a hairdresser he has fun styling a boy's hair.