Rowan Atkinson stars as the inimitable individual who turns the most ordinary situations into moments of excruciating embarrassment. In this edition, Mr. Bean visits a department store and gets carried away.
Preview clip 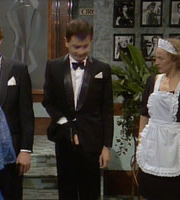 Bean has been given a credit card and is going to a department store try to enjoy using it. He doesn't like the smell of perfume, and crawls on the floor to get past it. He then pretends to wear a towel as a dress, tries out a potato peeler before buying it, and measures out a frying pan with a real fish that he brought with him! He accidentally puts the card in another man's back pocket, who walks off and drags bean with him into the toilet. The man is most shocked when Bean hands him a toilet roll!

Bean goes to a restaurant (alone) for his birthday, and orders the steak. He doesn't realise what steak tartare is, however, and is absolutely horrified by the sight and taste of raw mince and raw egg. He does his best to hide it in the most interesting of places!

Bean is in the line-up waiting to greet the Queen at a performance. He needs to smarten himself up for the visit, but gets his finger stuck through his flies in a phallic way as he tries to fix them. When Her Majesty arrives, Bean accidentally headbutts the Queen into unconsciousness!

Mr Bean goes to watch a horror movie with his girlfriend but is too scared to watch.