Janet insists Jonny return Andy's ring, get a job and buy her a proper engagment ring - from Argos. Meanwhile a lad named Munch turns up to work at Gaz's garage claiming to be the half-brother Gaz never knew he had. 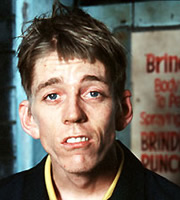 Janet insists Jonny return Andy's ring, get a job and buy her a proper engagment ring - from Argos. Jonny tries to find work but his job hunt is thwarted by a sex-starved cat. Eventually, he admits defeat and tells Janet the engagement is off as he can't find a job. Janet realises that love is more important and proposes to Jonny, with a bacofoil ring.

Louise thinks she has hit paydirt when she starts dating the ultra-rich Andy. Her illusions are shattered when Andy leaves her to pay their £150 dinner bill and then runs over a tramp's foot with his Lexus. Turns out not only does Andy 'not talk about money', he also doesn't spend it.