In a first for BBC Three, the cast of Two Pints Of Lager And A Packet Of Crisps are joined by the casts of Coming Of Age and Grownups in a special episode for Comic Relief. 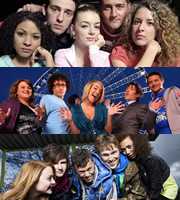 Tim, the bartender of The Archer, arranges Timothy Claypole's Comic Relief Night Of Fun - a pub quiz with a twist.

Split into three teams, the guys and girls battle it out in three categories, starting with the "bitch off", which literally ends in tears as Gaz takes it too far and DK takes it personally. Next is the "drink off" in which Grant, Donna and Matt head for the bar to see who can down a pint of lager the fastest.

The final category is the "flirt off" and Gaz is in his element. Jas joins Michelle and Janet (both played by Sheridan Smith), who do their best to seduce Gaz into giving them the highest score for their flirting abilities. As Michelle and Janet try their best lines, Jas shows that, where Gaz is concerned, the direct approach works best.

As a special treat for Comic Relief the episode ends with a song - Stop Thinking, Start Drinking - featuring an unmissable rapping duet from DK and Gaz.