Gaz and Donna are finally together, but Gaz was left paralysed by his accident and the two of them are struggling to come to terms with his new life in a wheelchair.
Preview clip 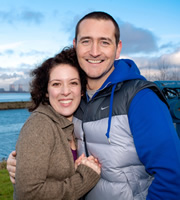 Gaz returns home from the hospital following his accident; he finds it tough to adjust to life in a wheelchair and becomes annoyed with his new carer, Billy, who is eternally cheery and overly helpful. Things are made worse when Donna shows him all the adjustments she's made around the flat, and when their first attempt at a quickie goes disastrously wrong it begins to dawn on them both just how much has changed.

Over at the Archer, a makeover is attracting a new, younger crowd to the pub and landlord Tim is really happy with the new business coming in. However, Tim's good mood is short-lived when his younger sister Cassie turns up fresh out of a juvenile detention centre and immediately stirs things up with the regulars in the pub. Despite Tim's best efforts Cassie will not leave, particularly when she discovers that old school crush Billy hangs out in the Archer - but he doesn't want her in Runcorn, especially as she refuses to apologise for the awful thing she did...

Gaz has woken from his coma to discover that everything in his life has changed.